Changes to this year’s Kentucky State Fair did not stop one Knox County student from showcasing her Kentucky Proud product. 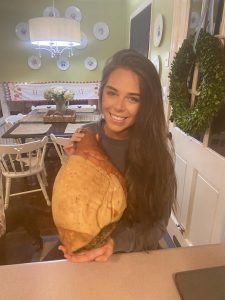 Months in the making, before the novel coronavirus was discovered in the United States, Knox Central’s Lily Jones started preparing for the annual fair.  Her entry?  A country ham. Despite uncertainties of whether the fair would take place, what competition would look like, and other restrictions amid COVID-19, Lily continued to work on her project and was able to take part after announcements were made about competitions continuing in the fair.

Her perseverance paid off. Lily was the overall age division winner in the non-smoked division of the contest.

Below, Lily shares in her own words the Kentucky State Fair and country ham experience:

Many people may believe that the country ham project is all about cooking or creating your own recipe, and although we are working with food, no cooking or eating is involved whatsoever. For this competitive event, we collect our cuts of ham in early January, usually around 7 to 8 months prior to the state fair. Shortly after we receive our hams, we start the preservation process which takes months. Once the curing process ends, we have just enough time to make last-minute touches before taking them to the state fair where they are judged on aspects such as presentation, conformation, and even their color.

Before this year, us, competitors, were also judged on our timed speech given in front of a panel of judges. However, due to this being such a crowded event, we were required to write and send an essay instead.

Altogether, the country ham project can be somewhat overwhelming because almost 800 kids compete every year. Having said that, I never saw placing or winning as realistic, or even a
possibility. When the 4H president first announced my name on the Facebook Live, I immediately ran downstairs to share the news with my parents and then messaged my 4H agent, Mrs. Renata Farmer. I am convinced that on that night, even while sleeping, a smile remained on my face. I was, and still am, so surprised! Competing at the state fair, as well as being a member of 4H, have brought me experiences such as this that I will forever treasure.