All six Knox County Odyssey of the Mind teams have qualified to advance to the state tournament following wins at the east-central division held at Corbin High School.

Dewitt Elementary and Lay Elementary both placed first in Problem 3 entitled “Classics… Leonardo’s Workshop”
In this problem, students had to imagine how inspiring Leonardo DaVinci’s (LDV) workshop must have been. Teams portrayed his workplace in an original, creative performance that included LDV, a patron, and a naysayer. The team recreated a DaVinci painting, made a three-dimensional representation of one of his works, and recreated another LDV work in any form. 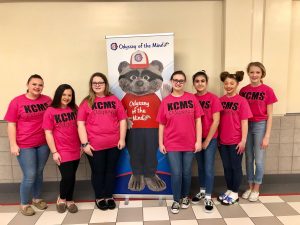 Knox County Middle School placed first in Problem 2 entitled “Hide In Plain Sight”
In this problem, the students had to take a cue from nature in this problem where they created and built a team-made mechanical creature that hides in plain sight. The creature changed its appearance three times to avoid being detected by a Searcher Character trying to find it. The way the creature changes was different each time. The team created and presented a performance where its creature gets into – or out of – various situations using this resourceful skill.

Placing first in Problem 5 was Girdler Elementary’s Division 2 team and placing second was Girdler’s Divison 1 team and Knox Central High School.  Problem 5 was entitled “Opposites Distract”
Disagreements can distract groups from seeing the bigger picture. In this problem, students created and presented a humorous performance about a sneaky character that distracts others while trying to take control of anything the team wishes. In the performance, it lured others into silly arguments and was successful two times. The arguments were presented using different dramatic styles and included attention-getting effects. In the end, the groups learned that they had been intentionally distracted and caught the sneaky character before it took control.

The state tournament will be held at Martha Layne Collins High School in Shelbyville on March 23.