The workshop was planned, but the outcome was higher-order thinking and creative problem-solving skills.

The first district-wide Odyssey of the Mind workshop was held on Friday, February 21, at Lay Elementary School.  Six elementary Odyssey teams participated in the workshop which was presented by Jimmy Cornn, east-central division board member of Kentucky Odyssey of the Mind and Jennifer Carey, gifted and talented coordinator for Knox schools and also an east-central representative.

“Students gained valuable practice and experience solving hands-on and verbal problems. They spent time problem solving and coming with new solutions as a team while learning from other teams as well,” explained Beth Mills, sponsor of Odyssey of the Mind at Lay Elementary.

All six teams are looking forward to competing in the regional tournament on March 7th and getting a chance to showcase their talents. 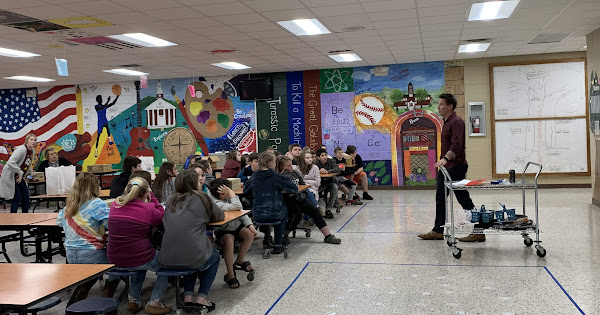 What are spontaneous problems?

Teams practice and prepare for the Spontaneous experience but the actual Spontaneous Problem they will solve is not revealed to them until they walk into the room to solve the problem!

Spontaneous develops quick thinking, creativity, teamwork, and the ability to deal with the unexpected which are all important educational aspects of Odyssey of the Mind. Teams receive a copy of their problem and are allowed to ask questions during their competition time. Spontaneous Problems come from three general categories:

Verbal
Verbal Spontaneous Problems require teams to give verbal, spoken responses to questions or prompts, and those responses are scored according to how creative (or common) they seem to trained judges in the room.

For example, teams might be asked, “Name things that are green,” or could be given random household items and asked to present a skit based on the premise, “When it rains, the strangest thing happens, I…” Teams are usually given just a few minutes to think and then asked to provide their solutions.

Hands-On
Hands-On Spontaneous Problems require different levels of physical interaction among team members to solve. Generally a hands-on spontaneous problem will challenge the teams to move, build, or to use provided items to complete a task.

Examples of “Hands On” problems range from building a bridge out of random items that extends as far as possible to creating a device to move different balls different distances and into scoring containers, and devising a system of communication using random objects. For Hands On problems, teams are often given a few minutes to devise, build, and test their solution prior to completing the task for score. In addition to points for completing tasks, teams are also often scored on their teamwork and creativity.

This type of problem combines some type of physical activity and verbal replies or prompts. Examples of “Combination” problems include each team member making a character from aluminum foil and then telling a story using those characters, having the team use props and costumes and say what a caption of their picture might be, or picking up objects and saying a creative use for them., Teams generally have time to look at any materials they are provided.

(Information provided by Odyssey of the Mind)