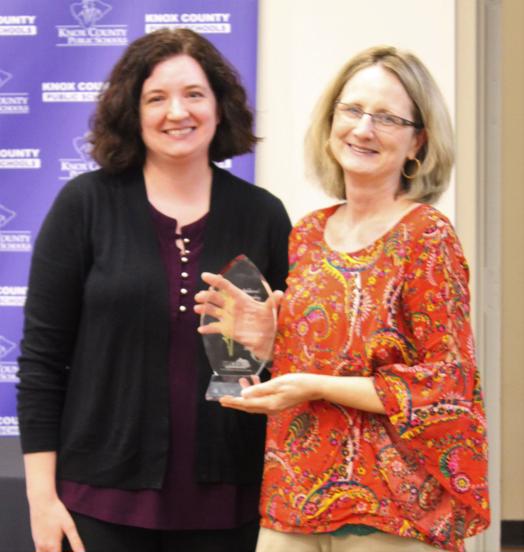 Knox County Public Schools’ chief finance officer Gertrude Smith was in the spotlight at the Board of Education’s October meeting.

KASBO representative Marla Carnes from the Russell County school district was present on Monday night to surprise Smith with the award.  Frank Shelton, communications director, introduced Carnes and Smith’s award by saying that sometimes words can not describe the exceptional and dedicated work of an employee.  He went on to say that when a professional organization, such as KASBO, honors one of their members, it represents the highest achievement and confidence in the recipient.

“It’s a total surprise,” Smith said as she was handed the award.  “I am very thankful and feel very blessed and very fortunate that I’ve been able to work in the Knox County School District because this is my home school, home school district,” she continued.

At the end of the award presentation, Superintendent Kelly Sprinkles spoke about the work ethic of Smith.  Sprinkles said that he could be thinking about a report or information at 9 o’clock at night and send Gertrude a message expecting to receive it in a couple of days.  Within an hour, hour and a half, the email comes with the information said Sprinkles.  He said with humor that he has learned not to email Gertrude at night.

In addition to the award presentation at the Board of Education, Smith will also be recognized at KASBO’s upcoming conference.  Registration for Smith to attend the annual conference is included, courtesy of KASBO, with recognition at the KASBO General Session and an award winners’ breakfast.