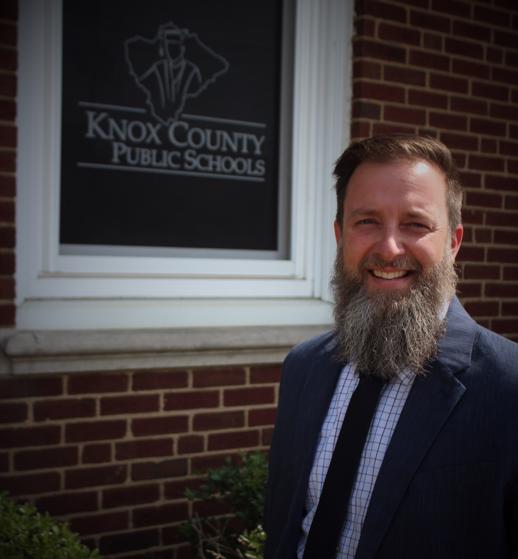 Knox County Middle School principal Jeremy Ledford has been selected as the next leader of the Knox County Public Schools.

The decision was announced by the Knox County Board of Education on Monday night following several days of special called meetings to conduct interviews.  Members voted 5-0 to employ Ledford as school superintendent.  He will receive a four year contract.

Following news of his selection, Ledford shared that he is “[…] humbled to be chosen to serve Knox County as the next superintendent.  I want to first thank God for his presence in my life, the Board of Education for their trust in me to lead the district, all my friends and family that have supported me, Linda Fortney, Sheila Terrell, and my awesome staff at Knox Middle, and my wife and family who always support me in my dreams.”

In his time at Knox County Middle, Ledford moved the school to a top 10% middle school in the state with consecutive years of increasingly high test scores.  He echoed that same goal for the district.

“My vision for KCPS is to become a top 10% performing school system in the state.  I believe we have the best students, staff, teachers, board, and community in the state,” said Ledford.

“I know our community is ready to move forward and focus on kids first and give our students the best opportunity for success.”

Board chairman Dr. Thomas Ashburn and fellow board members all had positive words of confidence to say about Ledford. In a collective statement, they shared “Mr. Ledford has a clear vision for the future where Knox County students rank among the top in the state.  He shared ideas for continued academic improvement and opportunities for students to apply their knowledge and skills earned. We are excited to work along with him to make Knox County Public Schools the best.”

The vision of the Board aligns with why Ledford said that he applied for the position.

“I applied to be superintendent because I have a strong desire to help students grow and succeed not only in education but also in life,” said Ledford.

“I believe that we can build on the success that has already been established in Knox County Public Schools and move our school system to become top in the state in the next four years.”

When asked how will we get there, he replied, “the only way to achieve success is for the community to pull together and focus on what is best for kids.”

Ledford claims all students at Knox County Middle as his own and now will call all students across the district his kids. He also has a personal investment. He and his wife Angie have four students enrolled in the district.  Son Blake will be a senior at Knox Central next year, daughter Ava will be a sophomore, Amelia will be a seventh-grade student at Knox Middle, and son Evan will be in the first grade at Lay.

“I promise as your next superintendent that every decision that is made will be for the best interest of kids.”

The selection of Ledford comes after an extensive search conducted by the Kentucky School Boards Association and applicant screening by Knox County teachers, staff, and parents.  The vacancy was posted when present superintendent Kelly Sprinkles announced plans for retirement earlier this year. There were fifteen applicants for the position.

When asked about his successor, Superintendent Sprinkles stated that “Mr. Ledford is a very strong leader who will be surrounded by dedicated staff and a Board that desire continuous improvement.”  Sprinkles has served as Ledford’s supervisor in two roles, the first when Sprinkles was principal at Knox County Middle and second when Sprinkles became superintendent, Ledford was selected by the school’s counsel to fill the principal vacancy.

Ledford will officially assume the role of superintendent on July 1.