Have you ever wondered where the man on the moon goes during the daytime?

Or have you ever wondered what it is like to have limited vision in one eye?

Jackson grew up as the youngest of four children on his family’s farm in Flat Lick before moving to Tennessee after graduating from college.  Though he was born with normal vision, he was left almost totally blind at the age of nine due to an unsuccessful surgery to remove a brain tumor.  It was during high school, however, that he found an interest in children’s literature after completing an English assignment.  That assignment would become the first draft of a published book.

Utilizing what limited vision remains in only one eye, the treasured memories of a little boy’s world before losing his sight, and his God-given talent for easily explaining how things work, Jackson created a story with his own illustrations of what might be seen through the eyes of a child.

The book, “Where Does the Man in the Moon Go During the Day”, is now published and available for order on Amazon.  During his book signing tour across Knox County, Jackson read the book and copies were available for purchase.  During his visit to the Knox County Library, the Barbourville Woman’s Club presented the library with a copy of the book.

Photos from his visit are available in the kcps.photos gallery. 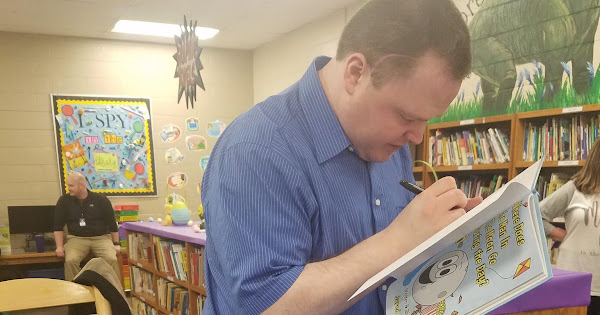