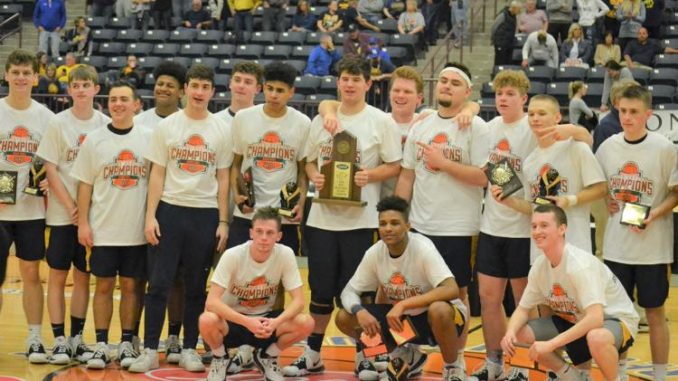 After falling behind by double digits multiple times throughout the game, the Knox Central Panthers knocked off the Harlan County Black Bears 72-68 in the 13th Region championship to earn a berth in the state tournament for the second consecutive season.

The Panthers were led in scoring by Zach Patterson with 25 points. He was followed by Jevonte Turner with 21, Kevionte Turner with 18, Isaac Mills with six and Jacob Abner with two.

Harlan County was led by Trent Noah with 20 points. He was followed by Tyler Cole with 17, Taylor Spurlock with 13, Jackson Huff with 10, Jacob Wilson with five and Josh Turner with three.

“I’ve pushed these boys hard,” said Knox Central coach Tony Patterson. “They’ve pushed back too. I can’t express how proud I am of these boys. They work as hard as any team I have seen. I give all of the glory to God. We knew coming in what we were capable of. I’m very proud of these boys.”

Harlan County opened the game on a 9-2 run, eventually increasing their lead to 14-4 with just two and a half minutes remaining in the first period. A pair of free throws from Isaac Mills drew the Panthers back to within single digits, 14-6. Back-to-back three pointers by the Black Bears opened the lead up to 20-6 with under a minute remaining. Zach Patterson added a baseline jumper that was matched on the other end by Harlan County. With the score at 22-8 with 12.1 seconds remaining, Patterson connected on a tough fall-away layup, but missed the ensuing free throw. After a missed bucket from the Bears with time dwindling, Kevionte Turner traveled coast-to-coast and connected on a layup to bring Knox Central back to within 10 at the end of the first quarter, 22-12.

Each team added only one bucket apiece in the opening three minutes of the second half before the Panthers pulled back to within single digits at 24-18 with less than four and a half minutes remaining in the first half. On the heels of an 11-0 run, Knox Central took its first lead of the game at 25-24 with 1:12 remaining in the second quarter. A pair of free throws from K. Turner extended the Panthers’ lead to 27-24 as the clock fell to less than one-minute before the half. Harlan County added a pair of buckets to regain the lead at 28-27, which they held at the half.

The Black Bears had a balanced scoring attack in the first half, with three players totaling six points, one player adding five, one adding three and another adding two. Patterson led the Panthers’ offense with 11 points in the first half. K. Turner added eight points in the half, Mills and J. Turner added four points each. After being outscored 22-12 in the first quarter, the Panthers outscored the Black Bears 15-6 in the second quarter to pull within one-point, 28-27.

Knox Central knotted the game up in the first minute of the third quarter on a layup and-1 by Patterson. After a Harlan County bucket gave the Bears the lead back, Patterson connected on a three to return the lead to the Panthers, 35-34. Harlan County opened up an 11-2 run to take a 45-37 lead. Knox Central answered with a 3-0 run to pull back to within seven points, 47-40. However, the Black Bears closed the third period on a 6-3 run to take a 10-point lead into the final juncture of the game.

Each team traded buckets in the opening minute and a half of the final quarter. A pair of J. Turner free throws drew the game back to eight points at 57-49 with six minutes remaining in the game. On the ensuing play, Harlan County answered with a three point shot that was negated on the other end by a K. Turner layup and-1 to keep the Panthers within eight points, 60-52. From there, Knox Central went on a 7-0 run to pull back to within one-point, 60-59 with four and a half minutes remaining in the game. The Black Bears then scored three straight to increase their lead to 63-59. Knox Central tied the game at 63-63 with 2:11 remaining after scoring four unanswered points. Harlan County regained the lead on a free throw, 64-63. On the ensuing possession, the Panthers took their first lead of the second half 66-64 on a Patterson three pointer. The Black Bears tied the game at 68-68 with under one-minute remaining. With 28.8 seconds left and the game tied, J. Turner attacked the basket ferociously, connecting on a go-ahead layup, giving the Panthers a 70-68 lead. A Harlan County turnover gave Knox Central the ball back with 7.5 seconds left. Jacob Abner was fouled and stepped to the line, connecting on both free throws, allowing Knox Central to secure a four-point victory and a berth in the state tournament for the second consecutive season.

Article by John Dunn, a contributor to the Knox County Public Schools
Read more on The Mountain Advocate Website