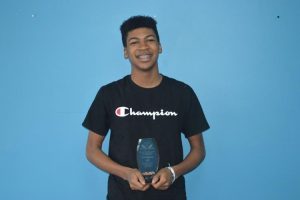 A student at Knox Central has received has been named a Carter G. Woodson Legacy Scholar. The award recognizes “African-American high school juniors who have demonstrated outstanding character, academic achievement, and leadership.”

Steven Reed, a junior at Knox Central High School, was nominated for the award by his college algebra teacher, Fatemia Fuson.

Reed has 4.048 GPA and is a member of the Science Olympiad team. He also competes in track and plays soccer. His athletic prowess has drawn attention from Union College, another potential destination for his college career. Reed stated he “likes the idea of it,” when asked about playing at Union.

Reed has completed numerous community service projects. He has volunteered with the Ronald McDonald House and worked on a project planting flowers at Knox Central. He also worked on a project preparing gift bags and baskets for the Barbourville nursing home. Service is a major focus of the award.

Reed aspires to be a dentist in the future, having taken an interest from his sister who works in the field. Despite being a high school junior, he has already shadowed at local practices. “I want to be surrounded by people with goals in life,” he said regarding his future.

When asked how he was handling the coronavirus pandemic, Reed stated he had been doing a lot of hiking and seeing nature. He also spoke highly of his teachers when asked about school. “I miss my teachers,” he said.

Article by Jeffrey Ledington, a contributor to the Knox County Public Schools
Read more on The Mountain Advocate Website