It’s a new season for Knox Central football coach Fred Hoskins as he trades in the playbook to receive the school handbook.

Hoskins was unanimously selected by the Knox County Middle School council (SBDM) to become the new principal of their school.  The vote came on Tuesday morning, July 13, with the official announcement being made in the afternoon. 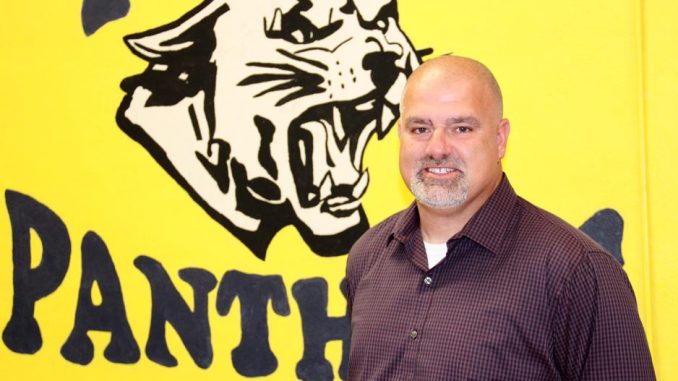 Hoskins has been a teacher at the district’s day treatment program for the past five years in addition to his duties as football coach.  He has a total of 21 years of teaching experience in other schools including experience serving as an interim principal.  He graduated from Union College and holds certifications in 5-12 social studies and school principalship.

“I am excited to accept this new role in the Knox County Public Schools,” Hoskins told staff members that were at the school on Tuesday.  As he made his way through the building, all those who he passed welcomed him to the middle school family.

“I am humbled and grateful for this opportunity,” he shared. “Being the parent of former KCMS students and working closely with the staff in recent years, I understand what a great opportunity this is to help lead not only the best middle school in the area but also the state.”

Hoskins has a record to match or beat set by former principal Jeremy Ledford, who was selected to become superintendent of the Knox County Public Schools.  Under Ledford’s leadership, Knox County Middle climbed to the top 10% of all middle schools in academic performance.  Hoskins says that he looks forward to continued success for his students at KCMS.

“During Mr. Ledford’s tenure KCMS become a School of Distinction and top 10% in the state. We look to continue that success and build off of it,” said Hoskins.

Hoskins has had his own Knox County success having served as head football coach of the Panthers for four years.  In 2018, school history was made when the Panthers earned their first regional championship.  “The sense of accomplishment the young men, school, and community showed was incredible and still gives me chills,” recalls Hoskins.

It’s those types of experiences that he wants to bring to Knox County Middle School, in academics and athletics.  “Just like in football, we will show everyone that it can be done.  Our kids deserve to have the best and be the best.”

As he begins his new role on Wednesday, he is ready to get started making plans with his team. “I look forward to working with our staff and community to prepare for the return of students in August.  We will strive to be the best at everything we do at KCMS.”