The December 16, 2019 meeting of the Knox County Board of Education was held at Knox Central High School.

Knox Central JROTC presented the Colors at the beginning of the meeting followed by the Knox Central choir leading the Board in Pledge and the Star-Spangled Banner.   The choir also performed a Christmas song for the audience.

The performing arts continued to be in the spotlight with recognition of students receiving honors in the band program.  Band program director Darrell Dixon introduced Hunter Karr (Trumpet) and Cory Partin (Tenor Sax) for being selected for the Southeastern Kentucky Music Educator Association Honors Band.  Dixon mentioned that this is the first time in recent years that he has had students to audition for the opportunity to be selected.

The JROTC was recognized for serving our schools, community, and the Commonwealth.  At the beginning of the school year, the Knox Central JROTC unit received notification that they were an Honor Unit of Distinction.  Colonel Shackelford spoke on behalf of the JROTC program noting it’s growth since being implemented at Knox Central.  The unit had the honor of participating in the Governor’s inaugural parade earlier this month.

Honors and recognitions then turned to extracurricular athletic activities.  Athletic Director Jeff Canady started the presentation by telling the number of sports Knox County now has, not just listed, but in competitive play.  The teams that were honored range from the spring to as recent as the past weekend.  They include: 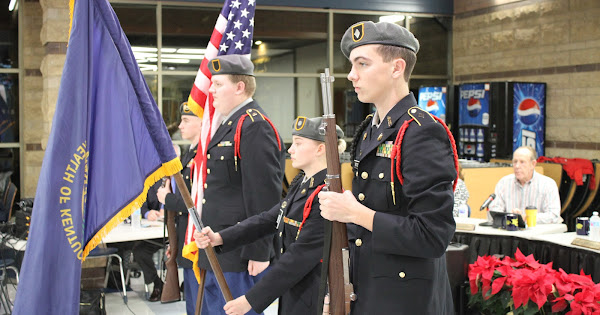 Amanda Gardner presented an update on the district’s Trane Performance Contract.  System controllers were on-site Monday to train employees on how to electronically control the outdoor lighting systems.  The Board voted to amend the agenda to include a BG-4 closeout document to submit to the Kentucky Department of Education to finalize the project.  This will allow warranys to begin on systems installed.  The final payment to Trane is set for January’s meeting.

Principal Jeff Frost presented an update on Knox Central High School during the principal’s monthly report to the Board.  Frost spoke highly of instructional practices being implemented in the building, as more and more teachers are trained and coaching is provided.  Teachers are engaging students in Kagan structures and higher-order questioning.  Frost spoke about the school’s iLead time where students are assigned to a teacher to serve as a mentor/advisor for the student group.  In reporting numbers from the fall accountability release, Frost noted areas where there was little movement such as the ACT, but still higher than the state average.  Professional growth was part of the discussion as it is embedded throughout the school year.  The Knox Central team is engaged in book studies where they gain knowledge and share their interpretation of the meaning and how it could be applied at Knox Central.  The school will be formally announcing it’s mission and vision statements soon.

The Board reviewed bids for mowing services for the upcoming calendar year.  A motion was made to hire Country Boy Lawn Service.  Board discussion turned to the bid not being the lowest with two members stating that it based on the service that the lowest bidder provided last year.  Focus then turned to the correct insurance and workman’s compensation plans that the company must have in place.  Country Boy Lawn will need to produce those documents before the contract will be valid.

Lawn care continued as the second agenda item focus on chemical services for the athletic fields.  Although outdoor sports is still months away, chemical services start in the new year to have the grass well prepared for athletic competition.  Turfworx LLC, the current bid, was awarded the bid again for 2020.

The Board discussed reciprocal agreements for the upcoming year.  A motion was made to lower the cap number by 15 students.  The conversation continued that the Board should continue to look at reducing the number of students until a fair number is reached.

In staffing, elementary school dance team sponsors will be receiving a $500 stipend for their services each year.  Until now, elementary cheer coaches were receiving $500 and dance team sponsors were not funded.  Save the Children Early Childhood Coordinators received a pay raise as part of the national program.  Their raise is funded by the grant.  Teachers achieving National Board Certification will receive an additional stipend for their work in earning the credential.  In addition to the Board’s base stipend of $2,000, the Board will match the dollar amount that it receives from the State and pay that amount to the teacher as well.  (Example, if state funding allows for $900 per teacher, then an NBCT would receive $2,900.)   The dollar amount is capped at $4,000.

Lynn Camp High Schools’ JAG students trip to the National Leadership Academy was approved and the Knox Central Baseball team will be traveling to Myrtle Beach this spring for the Ripken Experience.

Photos from the meeting are now online at www.kcps.photos.

An official copy of the Board meeting minutes will be approved at the January 27, 2020  meeting.  The meeting will be held at the Board of Education Annex, 199 Daniel Boone Drive, in Barbourville.