It was the battle of the words on Tuesday, February 19, as anxious and excited students went round after round in the county-wide Knox County Spelling Bee.

In round six and a half hour into the Bee, it was narrowed down to three.  Samuel Moore from Barbourville Middle, Alyvia Merida from Girdler, and Austin Partin from Lynn Camp would continue spelling their way to the end.  It would take a “secretary” to keep track of all the “embargoed” words that would be spelled.  Frank Shelton, the coordinator for the Bee, stated that he had a “theory” that this year’s Spelling Bee would be a battle.

“This year’s Bee was one of the most exciting in recent years, you could see the determination in all of the students, especially the three at the end,” stated Shelton.

There was no “belligerence” behavior that had to be “censure” during the Bee.  Instead, the words flowed like “poetry”.

In round seven it was down to two, Moore and Partin.  The two would spell back and forth until the thirteenth round when both spellers missed their word, indicating to the audience that a winner would soon be declared.

“The Spelling Bee is one of our favorite academic competitions of the year,” said Shelton.  “This year’s Bee was no exception and every participant was a winner having won first or second at their school bee.”

Moore will now represent Knox County at the Kentucky Derby Festival’s Spelling Bee event to be held in March.

This year’s judges were Claudia Greenwood, Nancy Hampton, and Harrison Davis.  All three are former Knox County educators.  The pronouncer for the Bee was Karl Wallhausser, professor of English at Union College.  The Bee was sponsored locally by the GRWC KY Barbourville Junior Woman’s Study Club, Knox County Farm Bureau, L&N Federal Credit Union, Forcht Bank and the Knox County Board of Education.

Participants in the Bee were:

Photos from the event are available in the kcps.photos gallery. 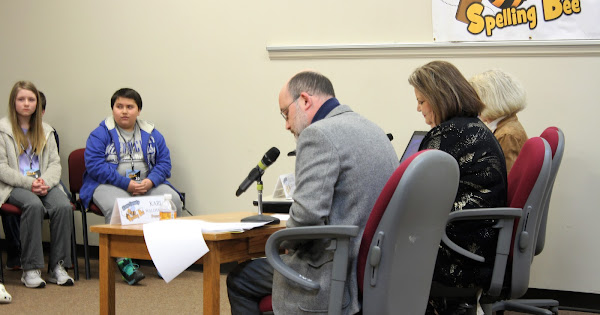