The words “paperwork day” may cause dread for some people, but for Lynn Camp’s Future Farmers of America, it was a day of success.

Paperwork day is a day about the officers of local and regional FFA.  In attendance representing Lynn Camp were Nathan Carnes, the current regional reporter, Elijah Brock, a candidate for office, and Connor Donaldson and Earl Bundy, voting delegates representing the Lynn Camp chapter. 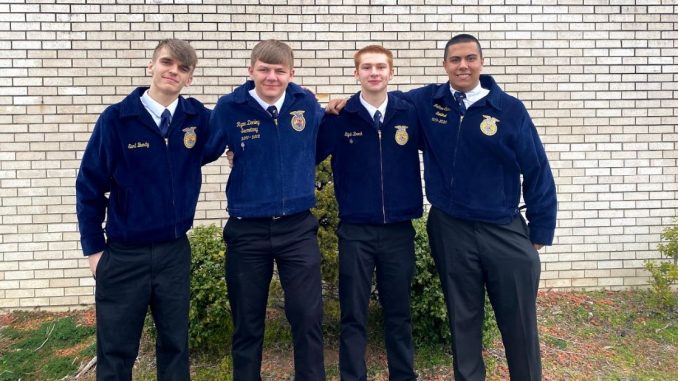 After the election process was over Elijah Brock was elected Regional Secretary for the 2020-21 school year and will be installed into office on April 24 at the regional banquet at Rockcastle County High.

“This is tied for the second-highest office a Lynn Camp FFA member will have held at the regional level,” said Dustin Johnson, chapter advisor and agriculture teacher.

During the regional banquet, Nathan Carnes will retire from his post as a regional reporter.

“This will be the seventh straight year a Lynn Camp FFA member has served as a regional officer,” said Johnson.

Brock’s election win was not the only success story of the day for Lynn Camp.

The success story for Lynn Camp continued as five members were named to receive FFA’s highest honor after approval by the state FFA chapter in April.  The State FFA Degree is set to be awarded to Nathan Carnes, Vonlee Howell, Braiden Dye, Ashley Skinner, and Danielle Bailey.

“In the history of Lynn Camp FFA since 1981, only four students have received that honor,” said Johnson.