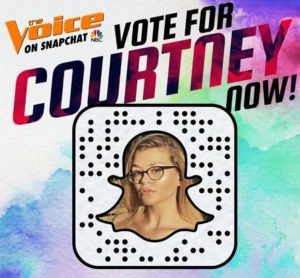 A 2017 graduate from Lynn Camp Schools has advanced to the finale of The Voice on SnapChat. Courtney Mason started her adventure this past fall when she was a member of Jennifer Hudson’s Snapchat Team.

Mason said she first auditioned for “The Voice” when she was 15 but she didn’t make it then. After hearing about “The Voice on Snapchat” a year ago, she auditioned again, making it as far as the second round.

“I can’t believe I’m getting the chance,” Mason said about her performances.

” If she wins the Snapchat Finale, she will become part of the live show on an actual team”, said Scott Prewitt, assistant principal at Lynn Camp Schools. “It is my understanding that they will be announcing the winner on the live show Tuesday evening.”

To help Courtney out go to stories on Snapchat, search for The Voice, then watch the episode. Instructions to vote are in the story.

Good luck Courtney from all of the Knox County Public Schools!