One of Lynn Camp’s best known figures on the sidelines of the basketball court and walking the halls of the school was recognized this season for his achievements on the court. 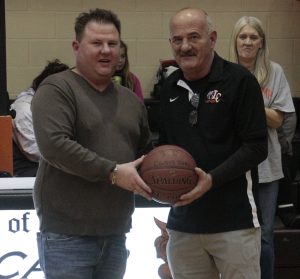 Coach Richard Jones, head of the Lynn Camp Lady Cats, began his coaching career in 1977, and his accomplishments include the following:

He served 21 years as an assistant football coach and defensive coordinator.

As the Cross Country Coach, he coached the first girl and boy to advance to state competition

As the Track Coach, he coached several boys and girls that went on to compete at the state level

He served as an assistant coach to both the boy’s and the girls basketball programs before taking over as the head coach for the girls program.   He won the first District Title for Lynn Camp in 2008.  He has won a total of 3 District Championships, 2 Southeastern Kentucky Conference Championships, and finished runner-up 3 times in the All A Region.  On January 25, 2018, he won his 300th game as our women’s basketball coach.

Throughout his career, Coach Jones has received numerous Coach of the Year awards including 13th Region Coach of the year as voted by his peers.

He has coached a total of 40 years at Lynn Camp high school and amassed over 1500 games and competitions during this period of time.

Coach Jones would like to thank all of his current and former players, his assistant coaches, and administrators for their support.  He would like to extend a special thanks to Mr. Pennington, and Mr. Sprinkles for allowing him to continue doing what he loves most, and that is to coach!   Coach Jones says if there is anything he has learned over the all these years, it is this:  People will forget what you said, and they will forget what you did, but they will never forget how you made them feel.