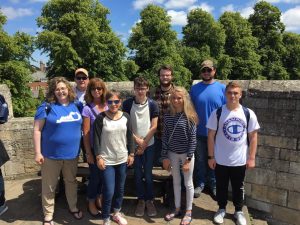 One of Knox Central High School’s English teachers, Mrs. Victoria Pope, has led another group of students and adults on another adventure this summer.  This group was much smaller, but the adventure was huge. The travelers included Hunter Campbell, Logan and Jacob Carnes, Lisa Deaton, Savannah Johnson, Melodie and Paxton Middleton, and Victoria and David Pope. This group’s eleven day adventure took them to Scotland, England, and France where they were able to immerse themselves in new cultures by being surrounded by the people, the language, the food, the way of life, which allowed them to gain inspirational moments that can’t be achieved in a classroom or online.

Some of the highlights of Scotland included exploring Edinburgh Castle, the National Museum of Scotland, and venturing on a historical evening ghost tour.  After leaving Scotland, the group made their way through England with the first stop being York where they walked large sections of the ancient Roman walls that once protected the medieval city.  As the adventure continued to the city of London, the group also visited Warwick Castle, Stratford-upon-Avon, and Oxford. Once in London the group visited numerous places, including Buckingham Palace where they saw the Changing of the Guard, the mysterious Stonehenge, and the city of Salisbury.  They also went to the area of Covent Garden to attend a comical and entertaining evening theater performance.

After leaving London, by way of the high-speed Eurostar train, the group arrived in Paris where the adventure continued.   In Paris they were able to take an expert-led bus tour of the city, walk around Notre-Dame Cathedral, shop and dine along the Champs-Elysees, visit the Louvre, and end the last night in Paris with a boat ride on the Seine River while watching the Eiffel Tower twinkle in the night sky.  Although the journey is over and everyone has unpacked, each has realized the benefits of the life-changing experience do not end; they have just begun.

This was Mrs. Pope’s sixth successful trip abroad with EF Tours, which is a family-owned company striving to inspire the next generation of global citizens, which is why she will be leading another eight-day adventure in June 2021 to Italy.  If you would like more information about this opportunity to see Italy for your student and/or yourself please check out www.eftours.com/2204165fa or email Mrs. Pope at Victoria.Pope@knox.kyschools.us.