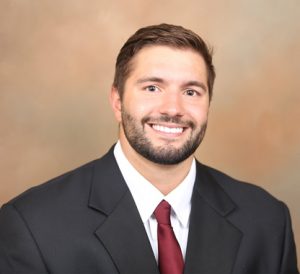 A Knox Central alumnus has been chosen as semifinalist for the collegiate William V. Campbell Trophy.

(Eastern Kentucky University, Richmond, KY) Jeffrey Canady is a semifinalist for the 2017 William V. Campbell Trophy® presented by Fidelity Investments, the National Football Foundation (NFF) announced on Wednesday.  The award recognizes an individual as the absolute best football scholar-athlete in the nation.

From a list of 181 semifinalists, the NFF will announce 12-14 finalists for the trophy on Nov. 1.  Each of the finalists will receive an $18,000 postgraduate scholarship as a member of the 2017 NFF National Scholar-Athlete Class, presented by Fidelity Investments.  One of the finalist will be named the winner of the William V. Campbell Trophy at the 60th NFF Annual Awards Dinner on Dec. 5 in New York City, and his postgraduate scholarship will be increased to $25,000.

Each nominee must meet the highest of standards based on their performance in the classroom, on the field and as outstanding leaders and citizens in the community.  The candidates come from all levels of play in the NCAA and the NAIA.

Canady is a redshirt senior linebacker from Barbourville, Kentucky.  He accumulated a 3.63 grade-point-average while majoring in environmental health sciences as an undergraduate.  Canady is currently pursuing a graduate degree in safety, security and emergency management.  He was chosen to the 2016 College Sports Information Directors of America (CoSIDA) Academic All-District® Football Team, chosen as the 2017 EKU College of Health Sciences Student of the Year (top student award in the entire college), is a three-time Colonel Scholar and a three-time Ohio Valley Conference Commissioner’s Honor Roll member.  He is also a team captain and a member of the players staff team leadership group.

During his career, Canady has started 15 times, played in 38 games and has made 220 tackles.  This year he has 28 tackles through three games, including 1.5 sacks and two tackles for a loss.  He ranks fourth in the Ohio Valley Conference, and 47th in the nation, with 9.3 tackles per game.  In 2016, Canady led the team, was second in the OVC and seventh in the nation with 123 tackles (11.2 tackles per game).  He had 10 or more tackles in a game seven times and posted a season-best 17 tackles at Tennessee Tech (Oct. 1) and against Murray State (Nov. 5).  That total tied for the 18th most in a single game in FCS football in 2016.

In addition to his success on the field and in the classroom, Canady has been involved in many community service projects.  He has worked with the teen center as a role model for kids from various backgrounds, spending time with them and showing them that people care.  He has also worked with the Colonels Cupboard (collects food for less fortunate students), Special Olympics Flag Football (worked with children with various special needs and helped with basic fundamentals of football), Move In Day (helped students move their belongings into university dorms), EKU Fan Day (participated in clinics for kids), National Roll Call, Jock N Roll (student-athlete organized fundraiser that sends a military veteran and his or her family to the OVC Basketball Tournament in Nashville), reading to elementary kids and cleaning up campus.

In addition to his community service, Canady participated in an internship and a part time job related to his field that also help keep people safe and healthy.  While working with the Knox County Health Department, Canady conducted food inspections with supervision and observed how onsite sewage inspections are administered.  During this past summer, he worked as a part time safety technician with the University of Kentucky Environmental Health and Safety department.  His main responsibility was inspecting fume hoods in chemical labs throughout the campus and UK Hospital.  He also inspected room pressure and reported maintenance issues.  In addition, he played a major role in the ergonomics department which falls under the direction of UK EHS.

The William V. Campbell Trophy is a member of the National College Football Awards Association (NCFAA) which encompasses the most prestigious awards in college football.  The NCFAA and its 23 awards now boast over 800 recipients, dating to 1935.  Visit www.NCFAA.org to learn more.

Founded in 1947 with early leadership from General Douglas MacArthur, legendary Army coach Earl “Red” Blaik and immortal journalist Grantland Rice, The National Football Foundation & College Hall of Fame is a non-profit educational organization that runs programs designed to use the power of amateur football in developing scholarship, citizenship and athletic achievement in young people.  With 120 chapters and 12,000 members nationwide, NFF programs include FootballMatters.org, the College Football Hall of Fame in Atlanta, The William V. Campbell Trophy presented by Fidelity Investments, annual scholarships of more than $1.3 million and a series of initiatives to honor the legends of the past and inspire the leaders of the future.  Learn more at www.footballfoundation.org.