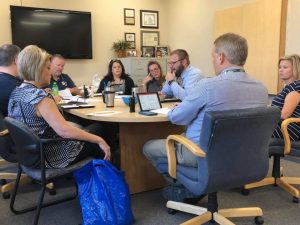 Did you know that Knox Central is a Leader in Me high school? Among the first high schools to be selected for the initiative, the Leader in Me is a school and teenage version of popular Seven Habits of Highly Effective People by Steven Covey. Using the same habits as written about for adults, Knox Central has turned them into action for students and the teachers, at the school.

2018-2019 will mark the second year of Leader in Me at Knox Central and the school already has a list of accomplishments for both students and teachers thanks to participation in the program. At right, you will read the highlights of some of those achievements.

The leadership team meets throughout the year to make plans for activities, identify areas of improvement and growth, and to discuss how they are growing as a school and as leaders.

• The LEAD initiative is based around the work of Dr. Stephen Covey’s “The 7 Habits of Highly Effective People”. The goal is to instill these timeless principles of leadership into each of our students so they can thrive in 21st century higher education or work environments.

• Faculty & staff model and apply these behaviors to their life and classroom after receiving the same training that many major companies in business and industry take their employees through.

• Frost states, “When we (faculty, staff, students, administration) internalize these habits we begin to operate at our highest level of performance resulting in huge dividends as a school!”

• Even though the LEAD initiative only started in 2017-2018, Knox Central High School has been developing leaders for many years now.

• The leadership development does not stop there. In the recent “grow your own” program for inspiring leaders, ½ of the class was made up of KCHS employees!

• “Though developing leaders and losing them has it’s challenges” Mr. Frost said, I am still very pleased to see our faculty excel and continuing to grow and develop their leadership skills!”