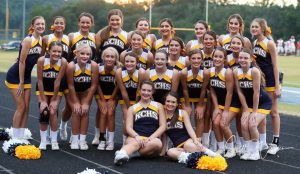 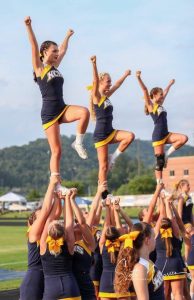 Knox Central Cheer began early this year as we began preparing for the upcoming season in May 2018. They at-tended UCA Camp in Daytona Beach, Florida in July where they excelled as they won a spirit stick, banana, several gold ribbons, trophies and plaques. In addition to those, we had 3 All Americans… Hannah Daniels, Jalen Jones & Tyra Terrell and 4 “pin it forward” recipients… Hannah Daniels, Jada Mills, Faith McKeehan & Mara Wilson. As a team, they placed 2nd in the routine division, 1st place in the game day division and were the overall game day winner for the entire camp! Not only did these girls excel on the mat, but they stood out among their peers as they received the Leadership Award. This award is voted on by the teams at the camp and is given to the most encouraging team and the one that was most desirable for others to be a part of! We were very impressed with each of our girls as they received this honor!

KC Cheer has been working hard this season as they prepare for competition! Twenty-four girls have devoted many tireless hours getting ready for not only their up-coming competition, but also preparing for football season and cheering on the Panthers! They have been working on new skills and a new level of stunting! The Regional Competition will be held on November 3, 2018 at The Arena in Corbin, KY. KC Cheer Head Coach, Joy McKeehan and assistant, Maria Swafford are leading these girls not only in working hard on the field and mat, but also teaching them life skills by leading them by ex-ample and holding them to a high standard, at school and in the community. KC Senior, Hannah Daniels says “I am very excited about KC Cheer this year. We are learning and doing things we haven’t done before!”