With seven years of coaching experience at Lynn Camp Schools, the new head coach of the high school girls program brings knowledge of the game and of the players to the court.

Josh Mobley, a teacher at Lynn Camp, was announced as the new head coach during a meeting at the school on Tuesday, May 31.

“My decision to apply for the position of head coach for the Lady Cats basketball program was my determination to continue coaching a sport that I have always loved,” said Mobley.

Love for the sport, and knowledge of it and the players, are keys that Mobley states will drive the Lady Cats to a successful season.

“Another determination for my application for this position is due to the familiarity that I have with the players in this program already.  I have taught many of them in the classroom previously, and I have also coached many of them at a younger age.”

Lynn Camp administration showed their support for Mobley following their decision.  “Myself and the rest of the administration are very excited for coach Mobley to get started,” said Marc Estep, athletic director at Lynn Camp.  “He has been a part of LC athletics for some time now so I feel like it will be an easy transition for him and our athletes.” 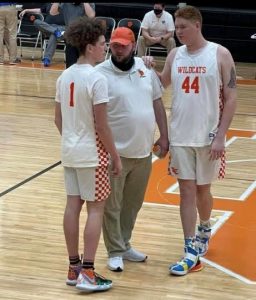 What is his vision for the Lady Cats?

“My vision for the girls’ program is to rebuild the program and work towards being tough competitors against our opponents.”

What will Lynn Camp fans see on the court?

“The biggest changes that spectators may see in our style of play will be a mixture of old school style, along with new school style of play. Also, I am a defensive minded coach so there will be noticeable changes defensively as well.”

He also asks for the Lynn Camp fan base’s patience.  Mobley stated that rebuilding the program is a day-by-day process, but one that he is excited to see and for fans to see come together.

Mobley’s family is also ready to support their number one fan.  His wife Casey and their three children, Sayde age 12, Bentley age 9, and Isabella age 5, will be cheering on the Wildcats and their dad this upcoming season.