Dewitt Elementary was in the spotlight on Thursday night during the Knox County Board of Education’s monthly meeting.

Students from Dewitt Elementary’s kindergarten class led the Pledge of Allegiance at the start of the meeting.  They were followed by their principal, Dewayne Smith, giving the Board an update on things happening at their school. 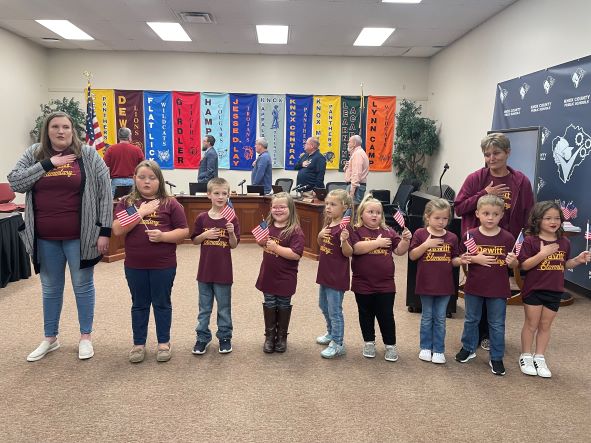 Also presenting to the Board were Jeff Frost, principal at Knox Central High School, and architect Scott Noel discussing ongoing facility projects in the district.

Superintendent Jeremy Ledford also presented to the Board, giving an update on his leadership standards and an overview of the recent School Report Card data release.

“Everyone knows that the release of test scores have come out for the first time since the COVID Pandemic,” said Ledford.

“As the commissioner has stated that these numbers let us know where kids are at from being in and out of school following the pandemic. We have bright spots with two different schools, being Mr. Broughton’s Lay Elementary and Mrs. King’s GR Hampton Elementary, both being high performing schools.”

Items discussed and approved during the meeting include:

Facilities and Operations – Using capital funds to pay for property insurance and principal and interest debt on school buses that were financed through KISTA; approval of change orders needed for the completion of the turf projects at Knox Central and Lynn Camp; pay applications to contractors for the turf projects; and approval to purchase new video security cameras and cloud recording system which will be installed in schools in phases during the year.

Governance and Leadership – The Board heard the first reading of amendments to the district’s hiring policy which states that extra duty and extra service assignments shall expire at the end of the assignment or year without notice of reasonable assurance that the employee will continue to be in that or a similar capacity in the following school year.  The first reading required no vote and will be voted on next month.

Teaching and Learning – The Board entered into a contract with the Kentucky Science and Technology Corporation for Advanced Placement training and courses at Knox Central.  The agreement specifically identifies AP Calculus as the course that will be supported.  Five special education consultant positions were created for two years, funded through ESSER, to provide extra support to schools directly focused on the learning loss of special needs students during COVID-19.

Resources and Support Systems – The district received its first offer of assistance from the state for technology funds in the amount of $45,987.  The funds must be matched by the district.

Other Items with Discussion – The Board renewed their agreement with Elgin to receive reimbursement for bible release time that the foundation offers schools.  A contract was signed with DocuSign which will allow the district to move several forms that require signatures to be electronic with a workflow created to expedite the processing of the forms.